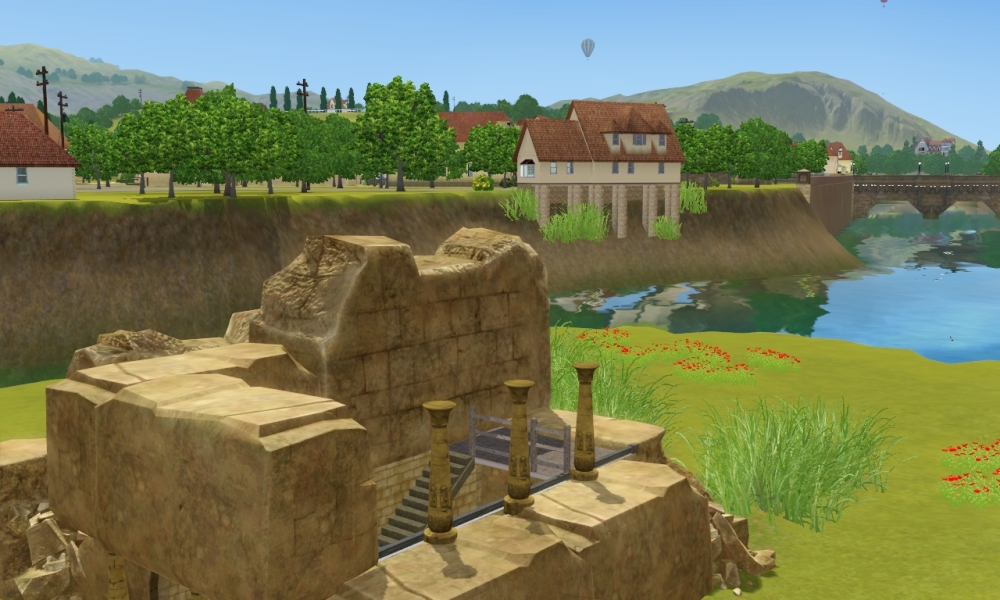 Leonardo has prepared a surprise for his conquest. He has invited Shasta to share a late supper in the medieval monastery ruins on the tiny island of St Louis. 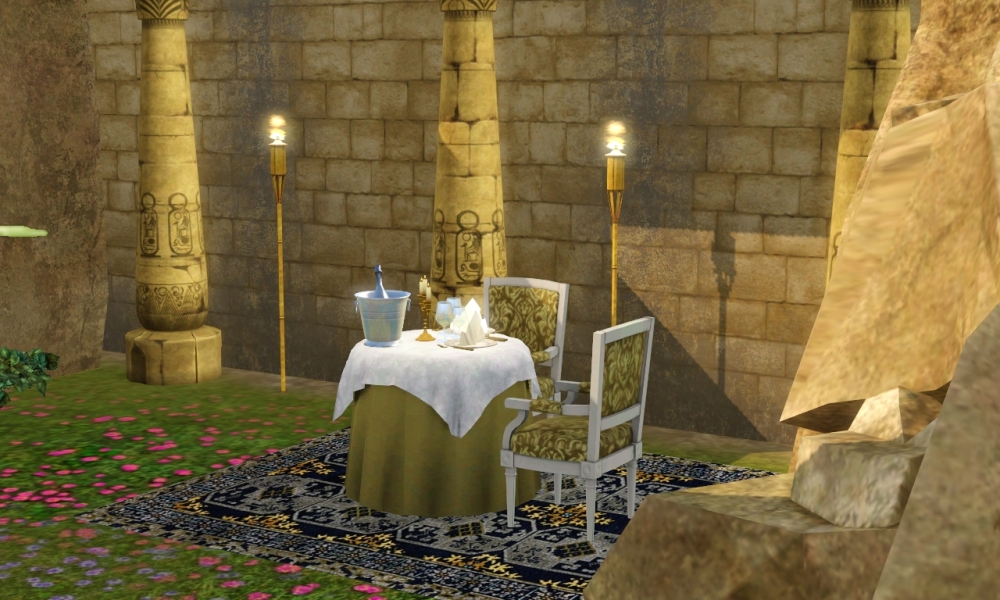 Leonardo is impatiently waiting, checking everything over and over again. The Butler, Jean, is taking care of the food which is delicatessen take away from the Parisian caterer Fauchon. The table is set on an antique Persian rug directly on the grass, the champagne is on ice, the candles waiting to be lit and the two musicians from Venice are humming romantic barcarolles while according their instruments, a violin and a mandolin. Satisfied that everything is set downstairs, he takes the wooden stairs two at a time to check on the important little box hidden in a crevice in the rock. He should know by now that Shasta is always late. 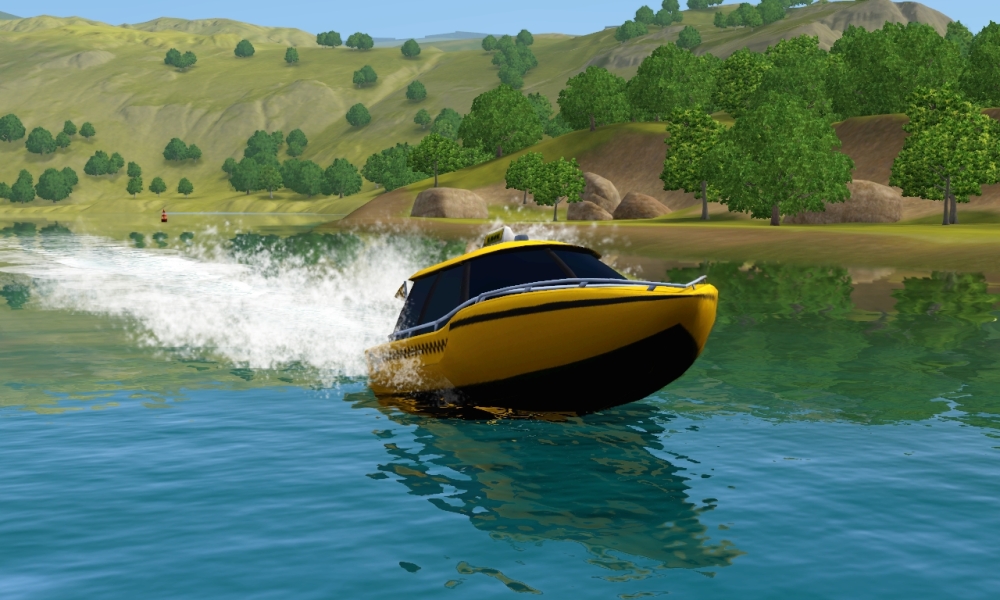 Finally he can hear the sound of the boat arriving. He grabs the flowers and waits for her to appear…

Shasta wonders what Leonardo is up to this time, asking her to dress up and sending a taxi boat for her… She didn’t object, however, as the invitation was accompanied by a large square ivory box with Liska Salzburg discreetly written on it. Inside she found a wonderful Thomas Kirchgrabner silk gown in different shades of grey and a box with earrings. Huge Tahitian pearls cradled in a simple gold and diamond setting. She can’t even guess how much they are worth. Together with the diamond bracelet, she guesses they would have her covered for at least a year or so. If it comes to selling them, that is.

She lifts the hem of her long dress and takes of her Louboutin high heels. Leonardo is so romantic, but if she had known that she would be following a trail of rose petals in the grass from the rudimentary quay towards a heap of crumbling stones, she would have worn sneakers.

Who is she kidding? She wouldn’t be caught dead in sneakers.

As soon as she arrives inside the ruins, she brushes off her feet and slips on the black suede pumps. When she raises her eyes, she can see him waiting on the makeshift landing with a huge bouquet of pure white flowers. He looks so handsome in his white smoking, the only thing giving away his age is his grey hair.

She accepts the flowers, thinking they look suspiciously like a bridal bouquet. ‘Thank you, Leonardo. These are my favorites,’ she lies, remembering how allergic she was to lilies as a child. But that was long ago, and she’s certain she has heard somewhere that most allergies vanish when you grow up. 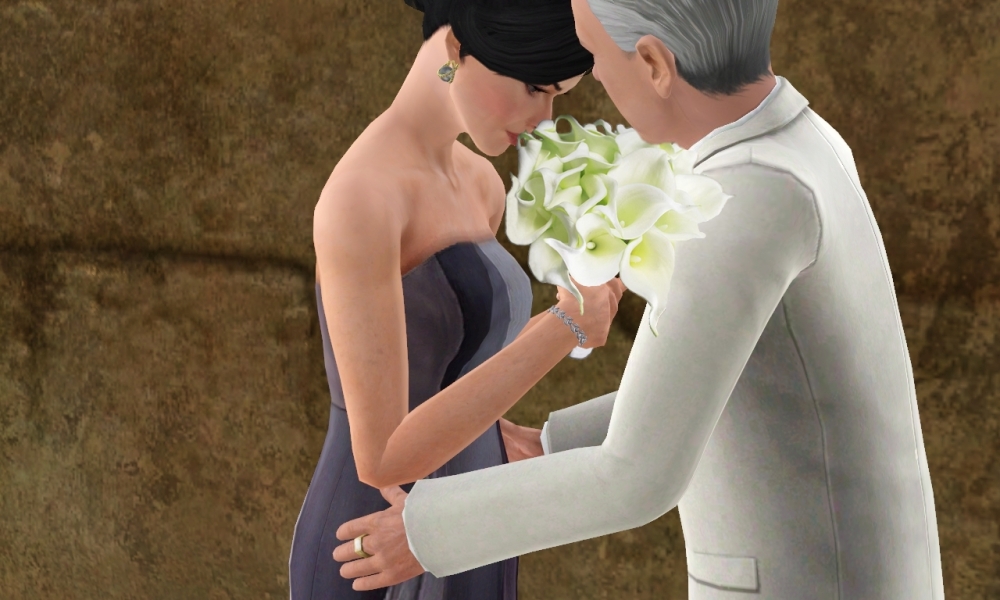 Shasta buries her nose in the white Calla lilies, and inhales deeply. Almost immediately she sneezes, feeling her eyes watering.

‘Scratch the flowers!’ With an irritated gesture, Leonardo grabs the bouquet and throws it over the landing. Shasta rushes forward just to see the beautiful flowers scatter on the ground. 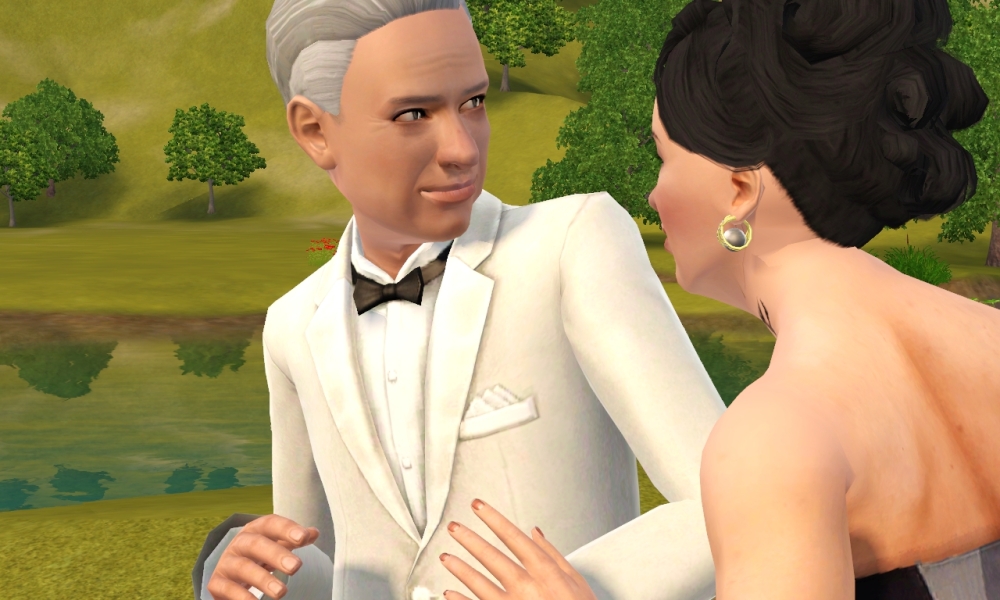 ‘Why-’ She glares at Leonardo who shrugs.

‘È impossibile! I can’t do this with you sneezing and crying.’ 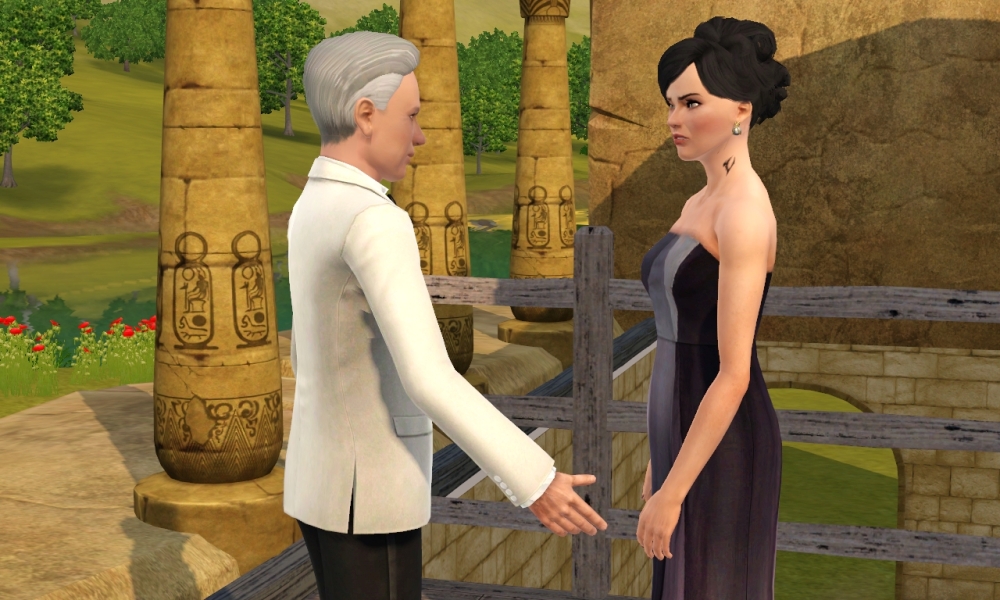 He avoids looking at her, clearing his throat. ‘Scusa.’ He reaches for her hands. 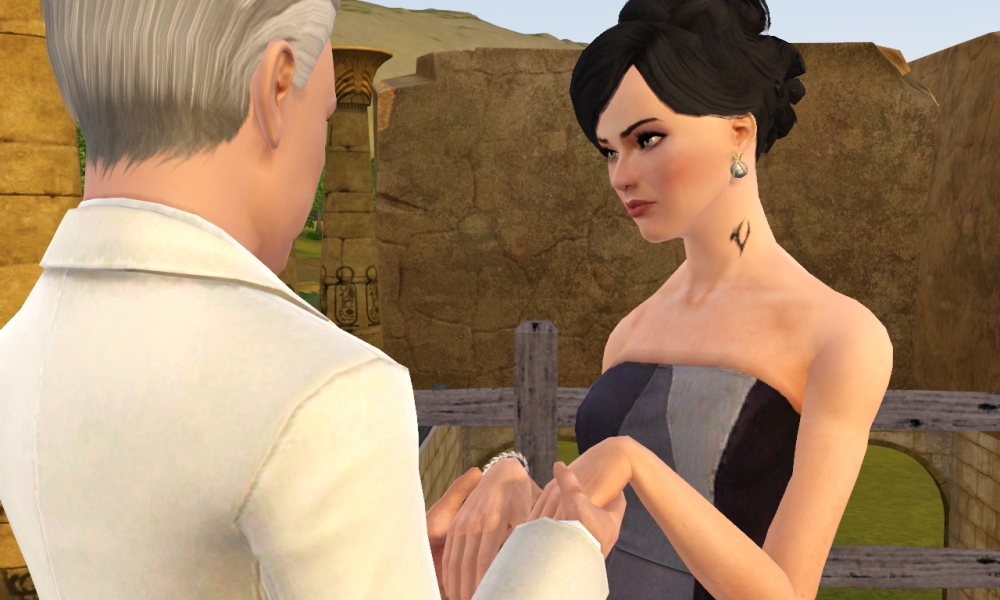 Still without looking at her, he scrutinizes her hands, caressing them with his thumbs. Finally he speaks. ‘Shasta… Cara mia… Ever since the first time I saw you, I’ve been waiting for this moment…’

Shasta swallows. Is this heading where she thinks it is?

‘Scusa. Ahem… You have changed my life for the better. Il sole shines brighter, gli uccelli – the birds’ song is more beautiful and I see il mundo in a whole new light because of you…’

Suddenly he bends down on one knee in front of her.

‘Ti amo, cara. To be able to spend the rest of my life with you gives me something to look forward to day after day.’ 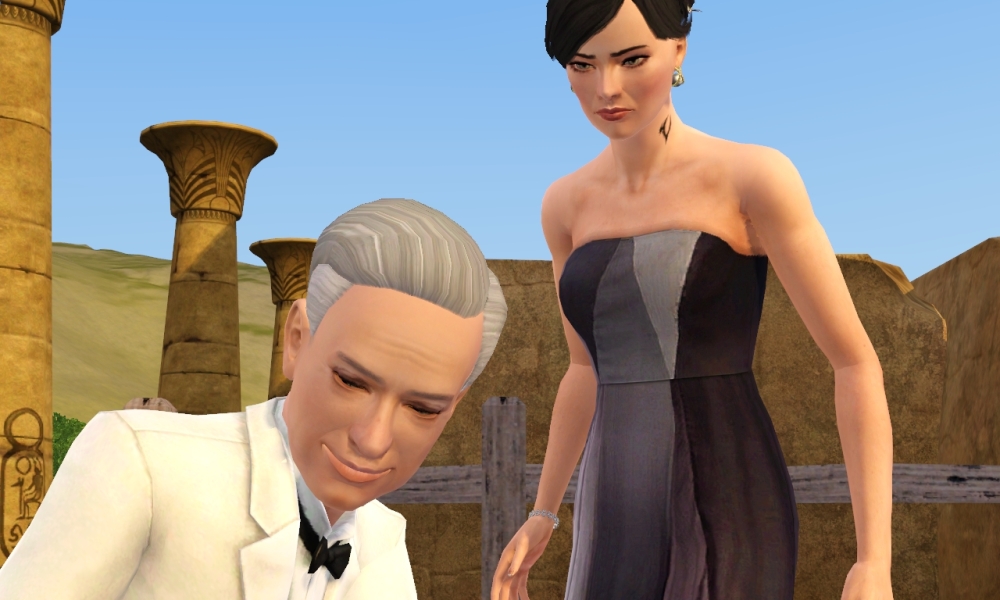 Incredulous she watches him search for something hidden in a crack of the stone.

What is this? Is he…? No, she must be wrong. It can’t be. They’ve only known each other for a couple of weeks.

Her heart pounding wildly, she watches him fumble with a blue box. She can feel herself go ice-cold and then start sweating… Oh my God. She has to keep a semblance of cool, she can’t start hyperventilating now, especially as there is no sign of a paper bag or something useful hidden among the rubble. Just jewelry boxes.

She is petrified but mentally she’s doing cartwheels and clapping her hands. He must surely hear her heart beat like a drum in her chest? 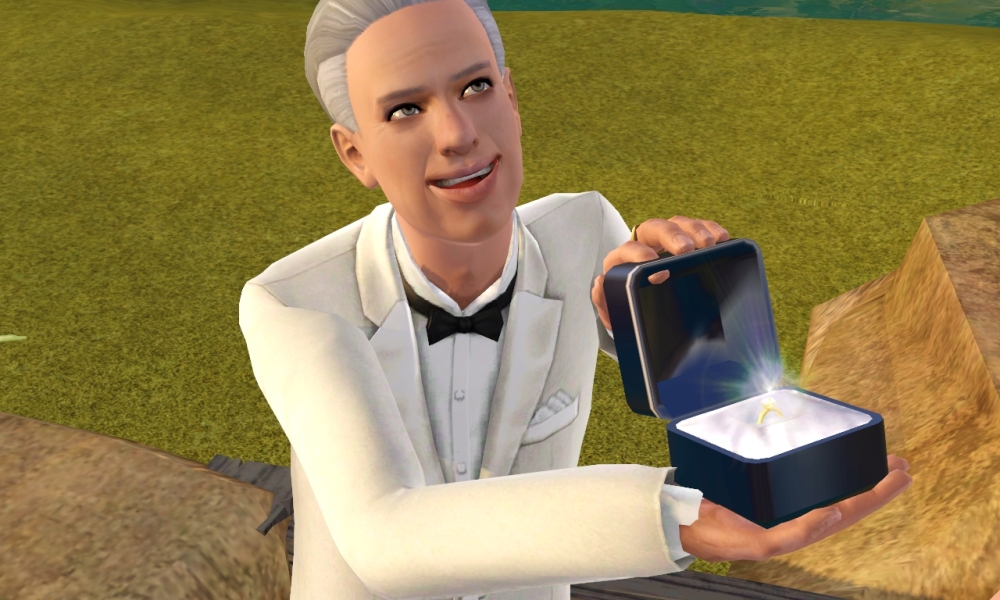 Scrutinizing her face, Leonardo opens the box slowly. He holds his breath, waiting for Shasta’s reaction to the enormous diamond. 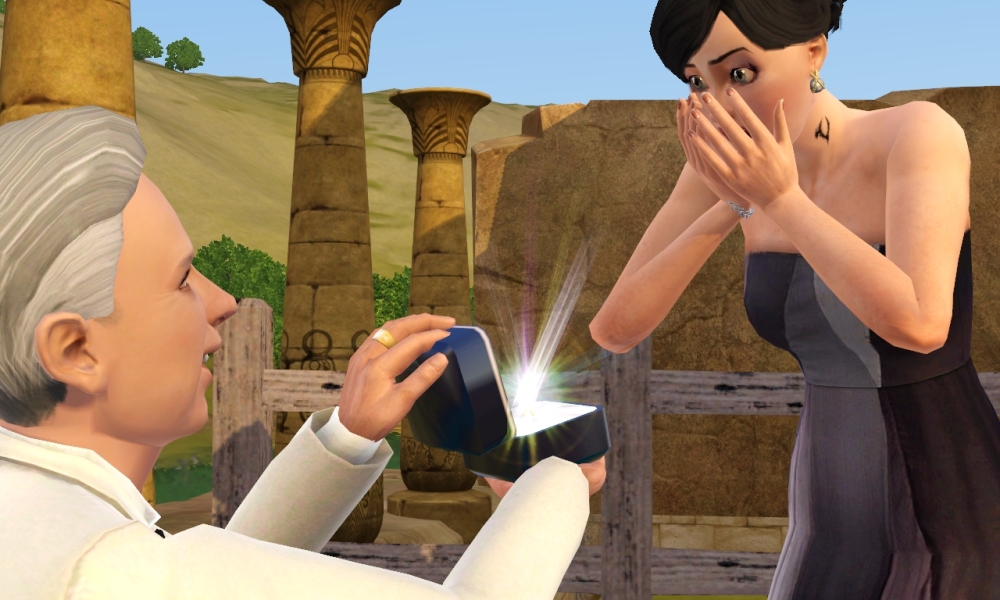 But she just stands there, her hand slapped over her mouth, blinking in disbelief.

Leonardo is confident, her reaction was expected. Smiling smugly he asks her, ‘Cara… Vuoi sposarmi?’

She gasps, blinded by the beautiful, sparkling, expensive ring. Leonardo clears his throat, repeating the question, ‘Will you do me the honor of becoming my wife?’

Hypnotized by the stunning jewel, she reaches out without a word and lets Leonardo slip it onto her finger. 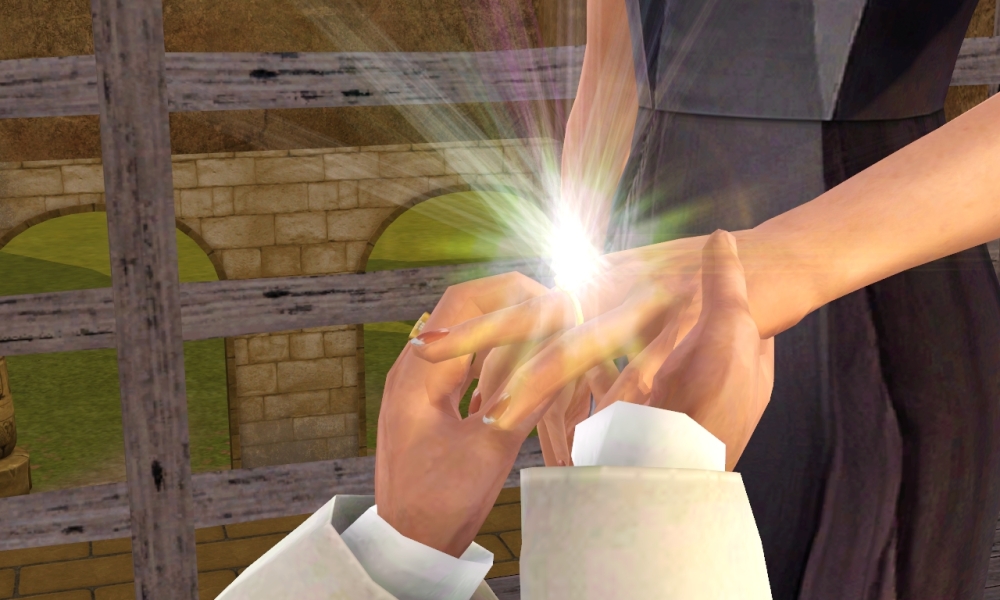 The wrong finger. Leonardo is so concentrated looking at her face that he doesn’t notice when she discreetly slips it off, changing it to the ring finger.

It’s a little loose, but it looks like it belongs on her hand and Shasta knows she will never, NEVER, take it off… 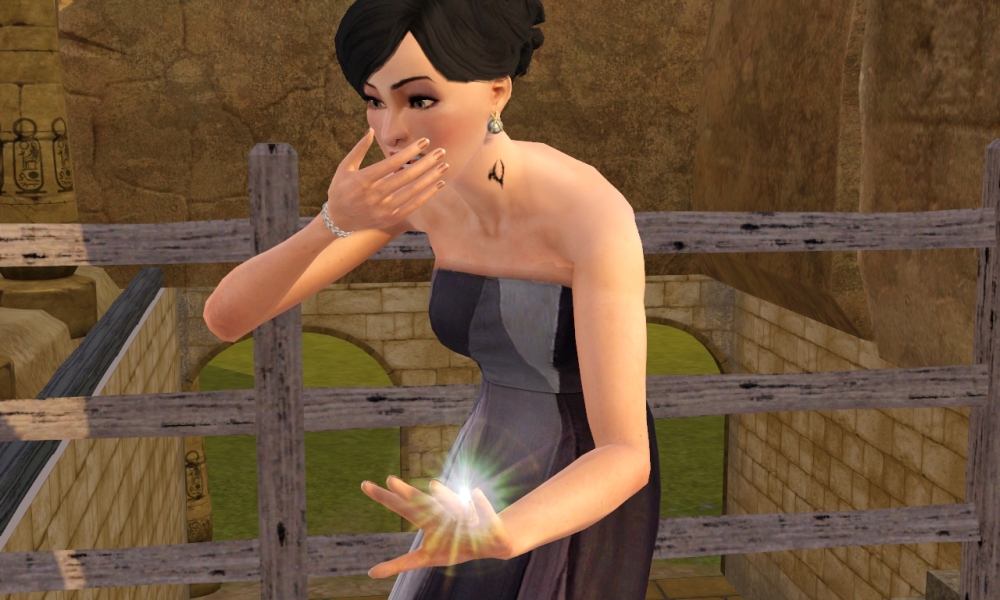 She can’t take her eyes of it. God, it’s beautiful! Leonardo waits patiently, still on his knees. What is he doing? Oh, yes. An answer. An answer…

‘Yes. I mean, si! YES!’ Is that squealing voice hers? She switches between hysterical laughter bubbling up and an impossible urge to cry.

She helps Leonardo to his feet and lets him pull her into his arms.

Leonardo is relieved. He had not for an instant imagined that she could refuse such an expensive bauble, but he had sincerely expected her to ask for a delay before giving her answer. 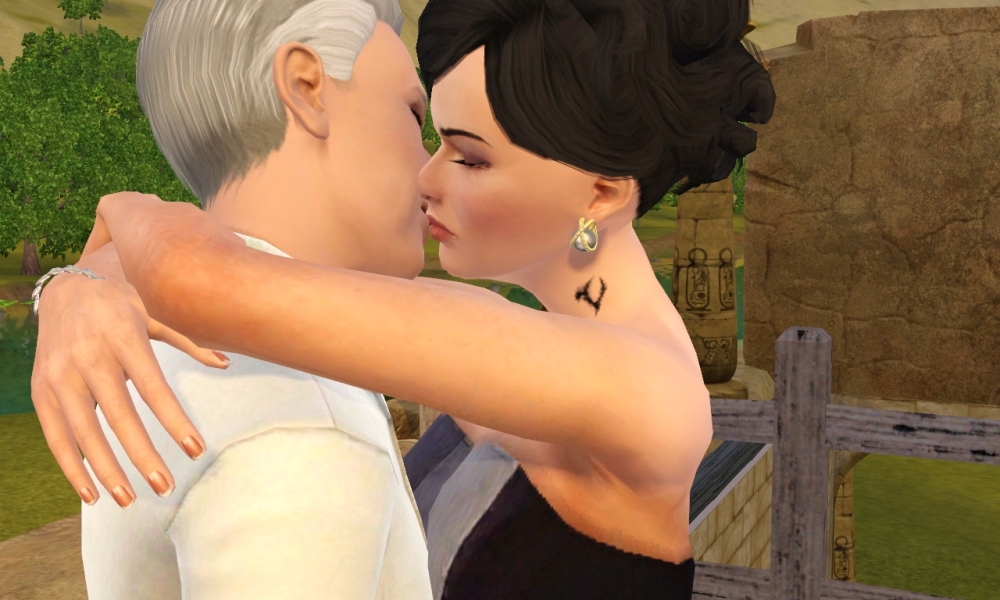 At exactly the right moment, music fills the air. The Venetian musicians on the ground floor haven’t missed their cue and the tones of a romantic Italian tune waft up onto the landing…

Shasta can only nod. She doesn’t trust her vocal cords just yet.

‘Sei bella… Sei bellissima… Ti amo…’ His soft-spoken words are like a caress. Shasta abandons herself to the music in Leonardo’s arms. Leaning her head on his shoulder she watches the last sunrays reflect in her brand new engagement ring. She can’t wait to show it to Julie and her uppity brother Pierre. Seeing that she caught the rich bachelor will definitely shut him up. Even though he seems more agreeable since she helped him file for divorce…

Holding hands, they join the little romantic dinner set up. Jean approaches. ‘Shall I bring the appetizers, Your Grace?’

‘You heard the future Contessa. I’ll open the Champagne myself.’ Dismissed, Jean disappears without a sound.

Shasta forces a smile. She guesses that she has to wait to be married before the staff calls her “Your Grace”. 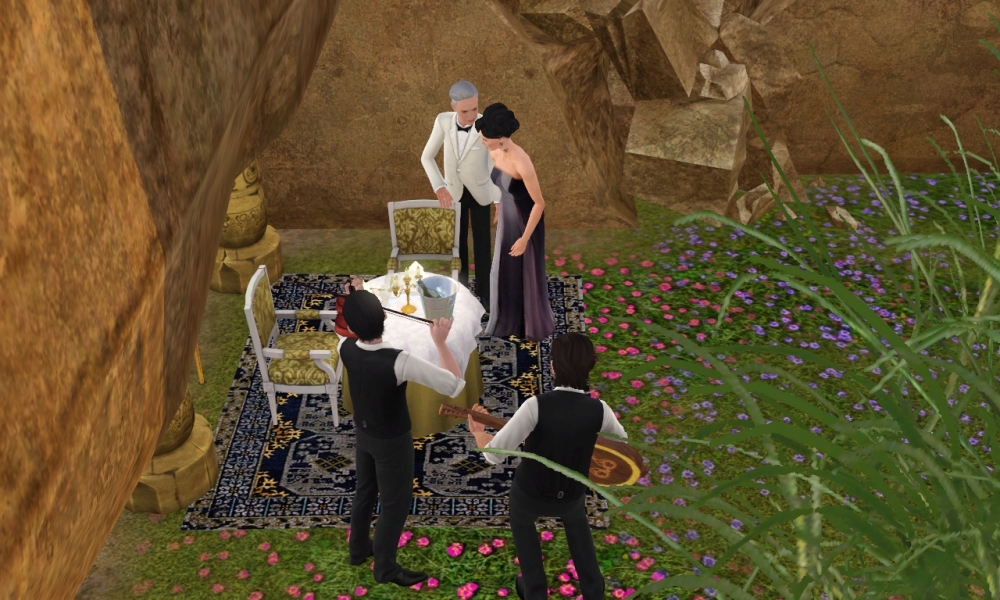 Leonardo pulls out her chair, and she sits gracefully. Oh, my God. This is so exciting. The musicians keep a respectful distance so the music isn’t overbearing, but she’s not up to talking anyway. She feels unusually intimidated by Leonardo. Her future husband who she knows so little about…

Leonardo takes her hand in his, covering it with kisses, his other hand lingers on her back, making her shiver involuntary.

‘What is it, carina? You are unusually silent.’

‘Err… I guess I’m a little overwhelmed,’ she forces a tight little smile.

She is speaking the truth. She can’t believe she’s engaged. Engaged to a real life Count. She will be a Countess. That’s almost a princess, isn’t it? She has to check the Almanach de Gotha. She wonders what her mother will say when her daughter’s name figures among the thousands of pages with Royalty. And Taïga, will she be a countess, too? Probably not. She’ll have to marry into the Aristocracy, and she’s not sure that is what the Council has prepared for her. Will prepare, she rectifies, hoping her daughter is still under the cloaking spell of her mother. She herself will be definitively freed from the Council as soon as she’s safely married. At least she hopes she will be… She wonders what she’ll do with her days when she doesn’t have to worry about money anymore. She’ll probably host charity events like the Red Cross ball in Monaco. OMG. She will go to the Red Cross ball! She had totally forgotten about Reinhold but thinking about balls she realizes that she’ll socialize with the Liebensturm’s as an equal. She can’t wait…

‘Have you thought about a date?’ she enquires, making Leonardo smile and kiss her hand again.

‘Of course I have. What about the Summer Solstice?’

‘June next year, then. It sounds good.’

She stares at him. ‘But the Summer Solstice is in two weeks!?!’

He nods. ‘I had thought a simple wedding in the town hall. We have passed the age to make a huge spectacle out of our wedding and…’ But Shasta doesn’t listen anymore. “Passed the age”. He can talk for himself, she’s not yet thirty and have always dreamt of a huge “spectacle”.

She doesn’t care much for the French so called delicacies, pushing the raw Oysters away from her and concentrating on the Champagne instead, wishing for something consistent for dessert. What wouldn’t she give for Mrs. Brown’s sweet potato casserole with marshmallows…

A sizzling sound makes them both look up. A firework rocket wags its smoky tail across the sky before exploding, spreading a thousand pinks stars over the violet night sky.

Leonardo swears under his breath, ‘Il scemo doesn’t know what time it is!?!’

‘Oh, Leonardo, let’s watch from the landing.’ Shasta has already pushed back her chair, motioning for Leonardo to follow her.

He dabs at his mouth with the heavy damask napkin before posing it next to his almost empty plate. He smiles at her sudden childish eagerness, taking her hand and letting himself be dragged towards the stairs. 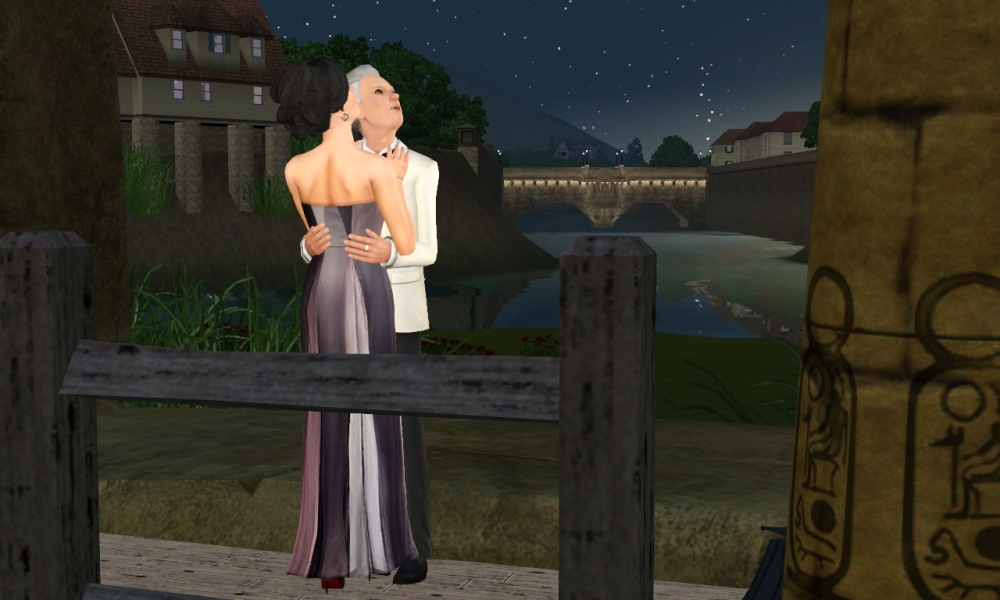 They reach the landing without any more fireworks exploding and Shasta is disappointed.

‘How could we have missed it?’

‘Oh, you didn’t cara. Look over there.’ He pulls her closer turning her towards the dark expanse of the water. He raises his arm and waves to someone on the other side.

At his signal the sizzling, whining sound starts again and in awe she watches a rocket shoot through the sky, the first of countless others, transforming the blue night sky into a multicolored spectacle.

And that is where we leave them…