James Horner – The Ludlows (Legends of the Fall)

Sunday morning at APYR, Derek’s been gone for about two weeks and the teens are getting ready for a long hike in the mountains.

Thomas hacked into SNN after the fire at Dementé Insanatorium, together with Taïga and Teddy, reassuring them about the fact that there were no victims. But no news aren’t necessarily good news, and as time goes by, Taïga and Teddy grow more and more worried…

Teddy is slumped on a hay bale in the early morning sun, watching Taïga. He takes a deep breath, ‘I’ve screwed up, Taïga. I’ve done something I shouldn’t have done.’

Taïga looks up from cleaning Sweet Thing’s hooves. ‘What do you mean?’

He hesitates, ‘You know Derek left his cell.’

‘Well, he did. And there are people who’s been calling and texting and I’ve answered them.’ When he sees Taïga’s disapproving look, he quickly adds, ‘He told me to! I’ve done exactly what he asked me to do.’

Taïga lets go of the mare’s hoof and pats her on the croup, ‘OK. So what’s wrong? If he wanted you to answer his messages…?’ She lets the question hang in the air.

‘Maybe I answered some texts a little too…’ He looks away, ‘Well, I might have got carried away…’

‘Teddy! Tell me what you’ve done!’

Teddy hides his head in his arms and suddenly it all comes rushing out.

Taïga listens to him astonished, ‘Let me see if I got this right. You’ve been texting my BFF on Derek’s cell, and now she’s in love? With you?’ She frowns, ‘Or with Derek?’

Gosh! What’s this “pretty Linn” thing with all the guys? Taïga dries her dirty hands on her jeans, before pushing away a strand of hair behind her ear. ‘Oh, no!’ A sudden thought crosses her mind. ‘You’ve got a crush on her, haven’t you?’

Teddy looks at his feet and fiddles with Derek’s cell. ‘Uh-huh…’

Silently he hands the cell to her.

Taïga hesitates, but she’s too curious, ‘Are you sure you don’t mind?’ She quickly starts to scroll down their discussion. Maybe it isn’t that bad?

But it is. The texts quickly escalates from flirtatious jokes to oh-so-romantic declarations and even projects for the future! In two weeks! Taïga quickly understands why Linn hasn’t been asking about Derek for a while; she’s taken matters into her own hands. And Teddy… Gosh! How can we get this mess straight? She doesn’t finish reading, ‘Well, you have to tell her!’ She hands him the cell back.

‘Exactly. What do you think your brother will say when he finds out what you’ve done?’ Deep down she knows Derek will probably laugh it off, so she continues, ‘And Linn…’ She crosses her arms, ‘She’ll be devastated, she’s had a crush on Derek since she saw his picture!’

‘I know. She’ll never forgive me!’ He looks up at Taïga, his face a picture of distress, ‘Just look at me!’

Taïga kneels before him, suddenly ashamed of her harsh words. ‘Teddy, you’re a fantastic person; Sweet, funny, considerate… Anyone can see that!’

Teddy snorts, ‘But I’m also fat and… and look at my face!’ He searches her eyes, ‘What do you see? An ugly guy with a pizza face! Who would ever want to kiss me?’

Taïga frowns but doesn’t look away, ‘I know you feel bad, but maybe I could help you with the spots…’ She squeezes his hand and stands up, ‘But to lose weight you’ll have to do some sports – and I’m not talking intensive soccer on the X-box with Thomas here!’ She winks, drawing a faint smile from Teddy, ‘Why don’t you come jogging with me tomorrow morning?’

Teddy sighs. ‘Yeah… I guess I have to start somewhere…’

She holds out her hand, ‘C’mon. I need a Teddy hug.’ Teddy smiles and lets her pull him up before hugging her.

‘Hey, you two!’ Chuck leads Freebird out of the barn, ‘No need for goodbyes – we’ll just be gone til sunset.’ He stops and looks from Taïga to Sweet Thing who’s tugging on the lead rope trying to reach Freebird. ‘Everyone’s ready. Now tack up, or you’ll stay here!’

Taïga hurries to get the heavy western saddle and soon Sweet Thing is ready to go. Taïga’s hat is slightly to big, she tucks her braids inside to fill it up enough to keep it safely stuck on her head. The seven horses set off, leaving Teddy, Jupiter and VJ at APYR.

The mustangs are fantastic horses, and under Tate’s supervision the four teens have also become quite good riders. Today he’s promised them they’ll gallop in the wild for the first time and they’re all excited.

Taïga loves hiking. The birds singing in the trees, the warm sun, the odor of fresh grass and horses and the rhythmic pace of Sweet Thing usually make her relax. 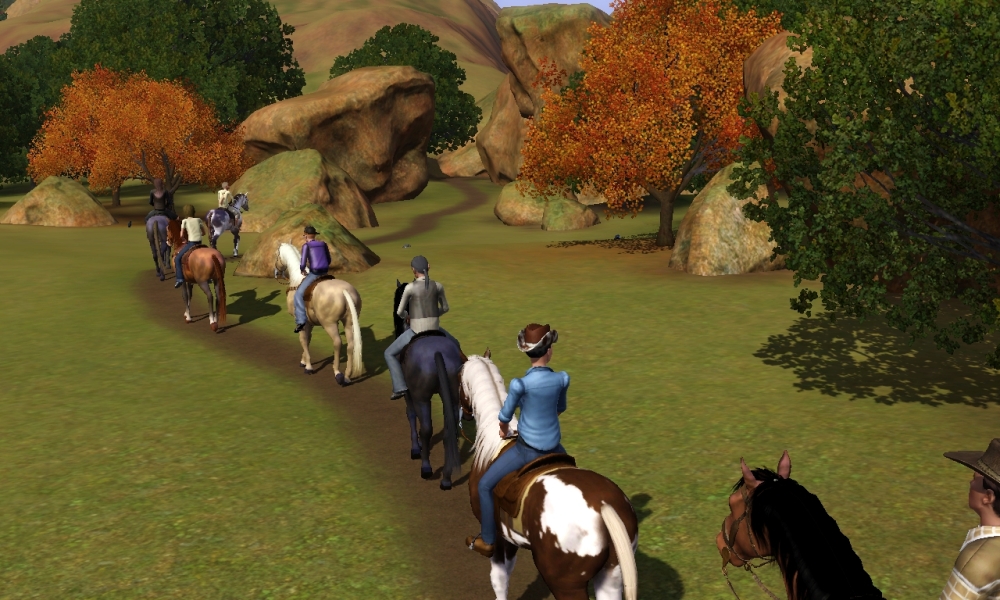 But today her mind is filled with Teddy and Linn. They are perfect together! But Linn will never forgive Teddy for lying to her…

I have to make her understand that she’s only physically attracted to moody and macho and generally unbearable Derek…She urges Sweet Thing on to catch up with Chuck. But he can also be quite charming, I can’t help feeling like a moth drawn in towards the light myself! And what if he doesn’t come back? The pain that shoots through her is almost physical. She closes her eyes for a brief moment, Please, please make him all right… She can feel the familiar pain seizing her forehead, as always when she worries about Derek. She shakes her head and pats the mare’s neck, trying to get her thoughts back on a less dangerous track… Now, how can I make Linn see that it’s Teddy’s humor and personality that’s made her fall in love… 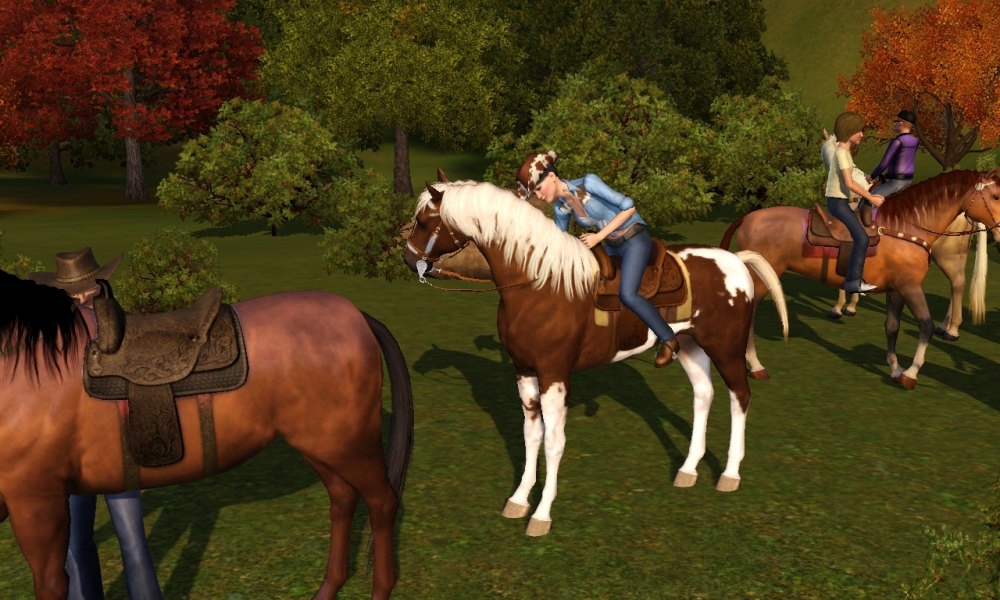 They stop on the ridge to adjust the saddles once more and have a quick snack.

Tate goes through the elementary safety instructions again. ‘This is about safety first. Horses are unpredictable by nature. They hear things we can’t and you mustn’t forget these are newly trained wild horses – aka prey.’ He looks at the teens, one after the other, ‘And what do prey do?’

‘They flee at danger!’ They all answer in unison.

‘Good. So just remember to be watchful, keep an eye on the ears…’ He glances at Lil Bling on Cream, ‘And if they get overly happy and start bucking away, just follow the movement and hold on to your saddle. Don’t shout and don’t hold on tight with your calves – that will only urge them on. We’ll go fast, really fast, so there shouldn’t be much bucking…’ 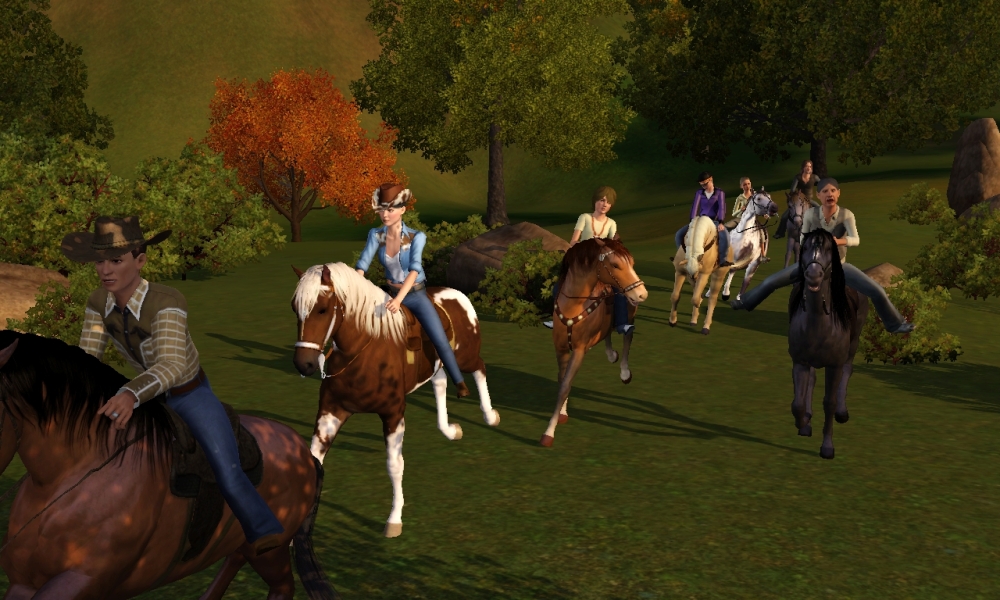 Of course Cream starts bucking at first, scaring Chase and Spot who were too close behind. 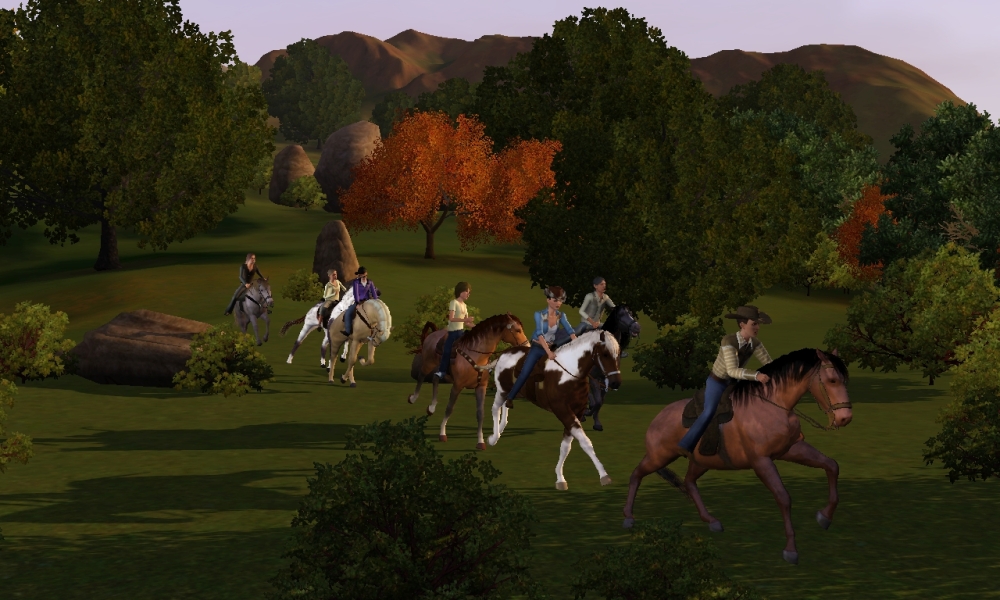 Taïga can’t remember ever going this fast! Chuck’s leading, Johnny brings up the rear and Tate stays on the side…

They race over the prairie… 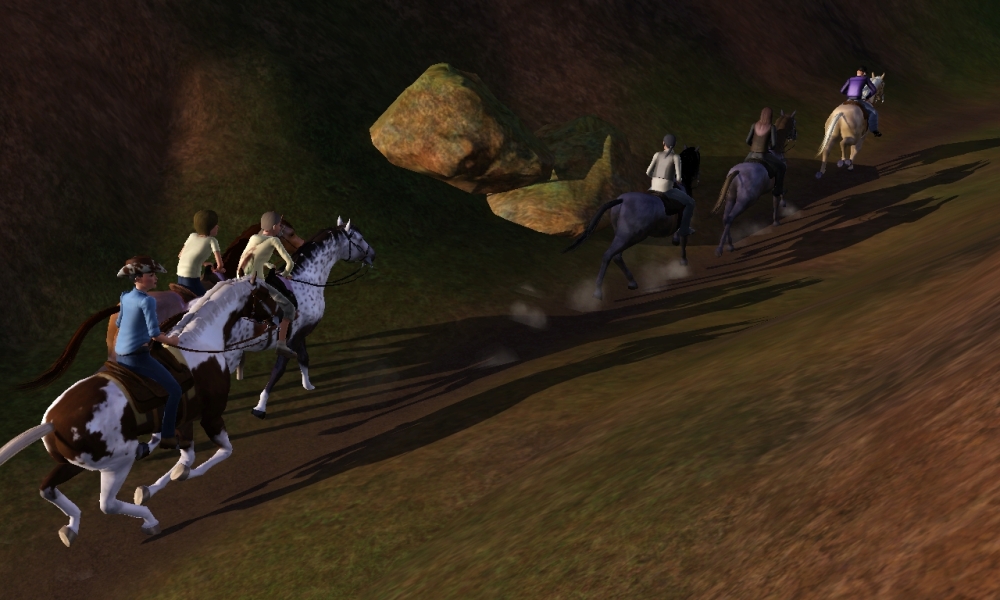 … and take a dirt track that leads further up into the mountains. The steep slope slows the horses down some, just as Tate predicted, and they settle in a steady, more comfortable pace. Lil Bling can’t hold back Cream, who wants to take the lead and resolutely doubles everyone…

Tate and Johnny chases after them, but Cream doesn’t calm down until they arrive at a lake, where she resolutely stops, letting Lil Bling continue on his own. They all burst out laughing at the sight of Lil Bling sitting in the water and malevolently looking at the innocent horse drinking beside him!

They have their packed lunch by the little lake surrounded by pine clad slopes, and stay just the time it takes for the horses to cool off and Lil Bling’s clothes to dry some. The trek back home is much calmer…

Tate takes them through Whispering Shadows’ Canyon, telling them fascinating stories about his ancestors and how they named the canyon because of the wind sounding like whining souls.

Taïga feels like one of the first settlers riding through this breathtaking nature, apprehensive of the dangers and yet excited about the discoveries to be made…

A last bend of the track and they’re out of the canyon. Tate rides up to Taïga’s side, and she urges him to tell her more about the Native Americans in Appaloosa Plains… 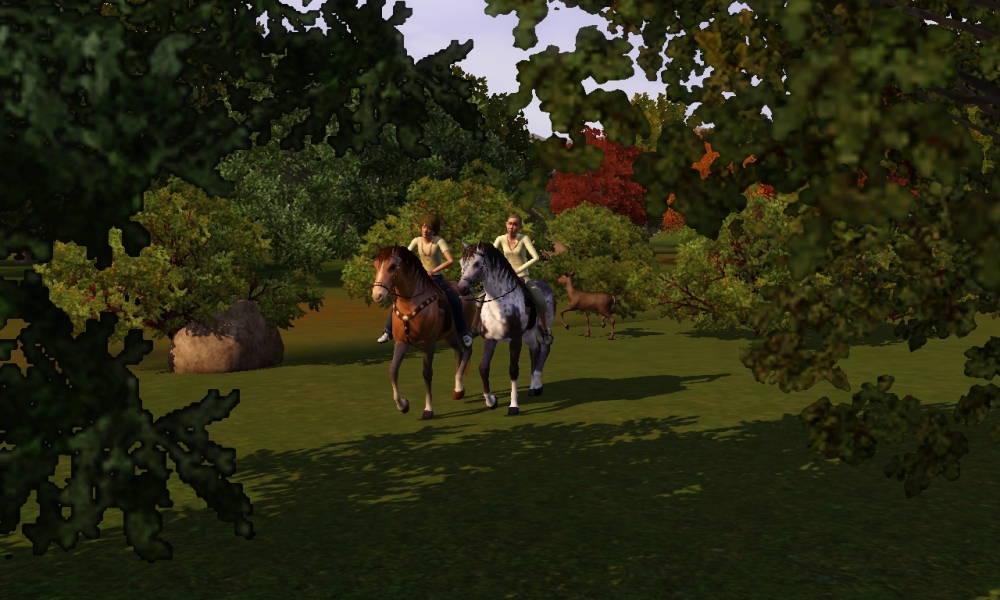 Thomas nods. ‘Yeah… I guess we talk too much…’

‘We were in Stary Community School together. We were in the same math’s class.’

‘Yeah, but you didn’t notice me. Nobody does…’

‘Can I ask you something, Chase?’…

It’s an exhausted bunch that rides into APYR that evening…